Posted on February 27, 2015 by statesidewife

Yet more snow here, which isn’t that terrible but bad enough to curtail most outside activity (well, running, mainly).  However, I have achieved two more milestones this week.  First, I finally ran the equivalent of here to Boston – 920km – which was the last place on my list when I started setting myself targets last year.  It’s only taken me 14 months to get there!  So now I need to shoot for the full 1000km (only just over 57km to go as of today).

Secondly, today I ran my fastest mile ever, in 8 minutes 21 seconds  😀  I should say that this was on the treadmill and with the knowledge that I was going to stop after that mile, so I don’t expect to be repeating the feat in a longer race at any time.  I also probably shouldn’t have then gone straight into a Chisel class with a huge emphasis on legwork, but hey ho.  I can still walk at the moment.

So I am feeling quite accomplished.  I think I have earned the new running shoes that should be arriving here tomorrow. For the first time I have bought a second pair of the same shoes, because they are THAT good.  They are the Saucony Virrata 2, which are spectacular because of the zero heel drop which gives a more natural running position (or summat like that, I almost sound like I know what I’m talking about don’t I?).  Anyway, the first pair have been awesome so far, and despite not needing a new pair just yet they were on sale so I’m buying them as a little celebration of my recent achievements and putting them away until I really need them.

I also bought the Oh She Glows cookbook as it was so good.  Other finds from the library during my snowbound hibernation have included Ready to Run by Kelly Starrett and Eat & Run by Scott Jurek, both of which I picked up on a bit of a whim but have found surprisingly enjoyable.  Ready to Run is not really about running but more about mobility and stretching to fix all sorts of niggly aches and pains and to therefore improve one’s running as a result.  It’s also very enlightening for anybody who is deskbound and hunched over a computer all day, which I hope not to be but expect I will be again by this time next year.  Eat & Run is a memoir by a guy who is an ultramarathoner and a vegan, but in truth I don’t think it would matter what the subject was, he just sounds like a nice chap and writes so well that I’d probably enjoy reading the phone book if he’d written it.

Oh and my Meet Me on Mars medal finally arrived too.  It’s HUUUUUUUGE, which you can probably tell from this photo: 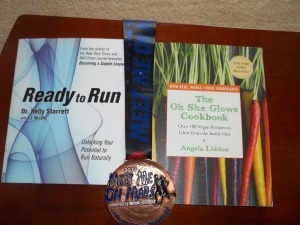 It is so heavy, I’m not quite sure where to hang it yet, as I think it will pull down anything I try to put it on.  Something for me to consider during the next round of snowfall then.

plant-based wholefoods on a budget