Posted on December 24, 2014 by statesidewife

My last competitive run of the year and I hadn’t done much running for a few weeks due to our Thanksgiving break and some generally crappy weather, however I hadn’t bargained on the power of cold weather and the promise of free beer for improving one’s speed on race day.

The Surf n Santa is a five mile jaunt along the oceanfront and through the Christmas lights, with participants dressed in their best festive fancy dress.  I was an elf, pursued for much of the race by The Grinch.  I’m pleased to say I put in one of my best results (I thought it was a personal record but apparently I managed a similar time once before, go me!).  My overall time was 46:52, putting me 972 out of 4208 participants, 57th of 428 in my age group, and 410th of 2736 females.  And I got several free pints of Winter Lager for my efforts at a cracking Christmas party afterwards!

Now hanging up my competitive running shoes until my second go at the Shamrock 8K in March – and also hanging my Surf N Santa medal on the Christmas tree!

Posted on December 24, 2014 by statesidewife 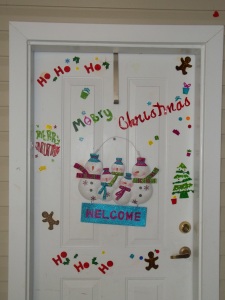 The City So Nice

Posted on December 18, 2014 by statesidewife 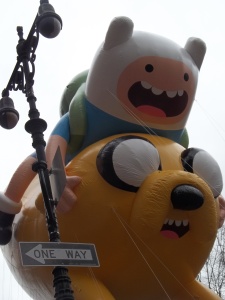 This is basically the expression on my face for the entire parade.

Before we moved over to the US, we made a list of all the places we wanted to visit during our time here, knowing that we probably wouldn’t manage them all in the time we had.  New York City was not one of the places on that list because we’d already visited it, for five days back in 2005.  I was excited by the city back then, but part of me thought that this was just because it was my first visit to the States and the whole experience was totally new and awesome.  So I wondered whether, having now lived in this fine country for more than a couple of years and become used to the place and the people, I would actually like NYC as much now that I have other great American cities to compare it to.

Like I say, we were in no rush to visit NYC.  We made the decision to return for one reason and one reason only.  The Macy’s Thanksgiving parade.  Having watched it on TV for the last two years, we felt it was an experience that we wanted to see up close for ourselves, and this was likely to be our last chance to do it.  Neither of us are fans of large crowds of people, so I actually don’t know what possessed us to visit the most popular city in the US on the busiest weekend of the year, but we booked our hotel a year in advance and then there was nothing stopping us.  Except the weather (almost).  Having had unseasonably warm, sunny temperatures of around 24c in the days leading up to Thanksgiving, suddenly a huge snowstorm was predicted for most of the North East of the country, potentially bringing a large area to a standstill and ruining Thanksgiving for a lot of people.  Having heeded the warnings, we took the sensible option of leaving home a night early and stopping halfway, then arriving in the city a few hours ahead of the predicted snow.  Which, of course, never arrived in NYC.  Well, it did snow quite a bit but it never stuck, so we had a picturesque view of the city without too many problems.  Although it was chuffing chilly.  I still maintain that it was colder during our 2005 trip (and there was a lot more snow then too) however this may be because I wore my giant padded coat for the whole of this trip, which I only managed to buy towards the end of the last trip and therefore froze for most of that time.

So, having seen all the big sights in 2005, and being in the city on one of the busiest weekends of the year, we decided to avoid almost all the touristy things and just hang out and watch the world go by.  We made it to the parade and it wasn’t as crowded as we expected, but maybe we picked a good spot by the side of Central Park.  We didn’t need to get there ridiculously early and we had a great view.  As well as lots of huge inflatables, the parade involves floats with famous people riding on them.  90% of them were completely unknown to us, which I am going to maintain was because they were American and not because I’m out of touch with the Yoof of Today.  I later watched the parade on TV where you helpfully get captions to tell you who everyone is, and I have to say I was still not really any the wiser even with the names ….   I was very pleased when Big Bird went past, and I thought that would be the highlight for me.  Then I saw the Harlem Globetrotters and thought it surely couldn’t get any better …  However I was beyond excited when KISS came past on a float.  The parade stopped for a minute or two and I had the pleasure of standing about ten feet away from them, watching Tommy trying to look mean and moody whilst also waving (clue: it didn’t really work).  The only other celebrity I recognised was Idina Menzel, so I don’t know what that says about the breadth (or perhaps randomness) of my musical knowledge.

We also made it to the Top of the Rock, having done the Empire State Building on our last visit.  The advantage with the Rock is that you can see both the Chrysler Building and the ESB from it.  (The disadvantage is having to spend all day listening to the husband going “Welcome to The Rock” like he’s a budget Sean Connery and we’re in Alcatraz all over again.)  Actually, at this point I may revise my thoughts about it not being so cold in NYC on this visit.  It was officially about -1c on our way up to the top, and with the height and the wind chill and whatever other important factors, it was cold enough to cause huge pain in my hands when I temporarily (and foolishly) took off my gloves to take a photo.  It took quite some time for them to thaw out and stop hurting again.

We did go back to one place from our original visit, The View in Times Square.  It’s a revolving bar at the top of a hotel and I think it does one complete revolution per hour.  This time around it wasn’t such a surprise when I came back from the toilet and found my table had moved.  It was just as good as we remembered it, and a fitting place to celebrate the husband’s birthday.

The rest of our days were spent pottering around the lesser populated areas of the city.  Leaving aside the madness of Black Friday, we spent a morning wandering around Central Park, this time not blanketed with several feet of snow and instead covered with runners (last time I don’t remember seeing another soul).  My absolute favourite meander, though, has to be Greenwich Village.  Having read lots of memoirs about the city in the early 70s and 80s, I was keen to have a look around.  Obviously it has changed beyond all recognition since those times but it still has a bohemian vibe about it.  I was pleased to be able to avoid Starbucks and hunt out some good coffee shops like Birch, who leave conversation cards on their tables to encourage their patrons to meet new people (and I have to say their coffee was one of the best I have EVER had).

This time around, I definitely saw NYC through different eyes, as I’m very used to the US now and so I was happy to potter around and not necessarily stick to the big touristy things.  However, I am definitely still as much in love with the city as I was on my first visit.  It’s definitely up there with San Diego and Boston as one of the places I could actually live.  Looks like I will have to persuade the husband back for a third visit in the future (maybe when the temperatures are above freezing).

COOKING ON A BOOTSTRAP

by Jack Monroe, bestselling author of 'A Girl Called Jack'

plant-based wholefoods on a budget